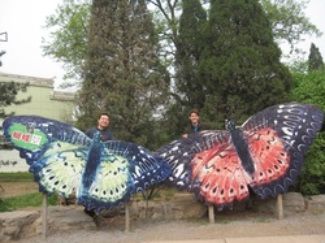 How do you create a sense of safety, comfort, intellectual learning, and meaningful relationships all in one place in a foreign country?

How can youth traveling become something more than pure exploration?

I offer my story that has guided my experience in China for the past 3 months, all of which has been made possible as being a China-US Youth Climate Exchange (CUYCE) Core Member.

I want to start by saying that I have traveled to China many times before, some independently.  For the past 9 months, I have been part of the CUYCE team. I have had the privilege of working with 9 Chinese and US youth over this time period and have built up a strong sense of trust and familiarity.

In mid-march 2011, I originally had plans to go with the California Trade Delegation to China for 2 weeks in the beginning of April. Unexpectedly, the delegation trip was cancelled, and I still had a plane ticket to China. My plans were completely changed.

I had reached out to the Chinese CUYCE team looking for potential options on housing in Beijing (BJ). Most of the team attended universities in BJ. I was pleasantly surprised how Nala Rongtai, a CUYCE member, quickly made it a priority to help me out in the situation on such short notice. Within a couple of days, he found a friend to host me, at no cost.

The friend was Weiwei, 23-year-old male preparing to attend Columbia University’s Graduate Program in Public Policy. He was living at his grandparent’s condo in Haidian District.

At the same time, there was going to be a large workshop held by Peking University CMD Club on the China Youth Delegation at COP16 and CUYCE.  It was to be held on March 28, the date of my arrival to BJ, but they decided to change it to April 1st to let me help co-present.

I was humbled by the extent to which my fellow teammates went out of their way to support and include me in the arrangements.

I remember my parents had some concern about the living arrangements, but I had enough trust that it would all work out.

I arrived in BJ on March 28th, 2011. Nala Rongtai welcomed me at the airport. The sense of accompaniment meant a lot. He took me via subway to Weiwei’s house while showing me how to maneuver between what felt like dozens of train lines. I soon realized my new living quarters was in the heart of where the top universities are in Beijing. I was a walk away from Renmin, Peking, and Tsinghua University.

After unpacking, Nala and Weiwei took me to the China Youth Climate Action Network (CYCAN) office, a short 5-minute walk away. I was introduced and warmly greeted by Zhan Yufeng, President of CYCAN, Guichun, Project Manager, and CaoWei, Operations Coordinator. I was literally being introduced into Nala’s community of colleagues and friends and seeing the first glimpse of China’s youth leadership in action on climate solutions.

That evening, Nala called up his friends from the Chinese CUYCE Team and we had a group hot pot.  Chen Yingao, Guichun, Weiwei were all there. Shi Xiangying and Ruanxi were in Yunnan helping to rebuild villages that had been devastated by the recent earthquake. Nevertheless, I was filled with a sense of joy, familiarity, and as far to say as ‘home’.  They welcome me with open arms.  It was casual, but it illustrated clearly that I had a huge support network, and we were all here for each other.

As part of being introduced to this network, I want to highlight three of my most memorable experiences.

1.     On Friday, April 1st, 2011, I met Yingao at Peking University. Yingao has created a detailed PPT for our presentation, and we went over it in the cafeteria over two dishes of dumplings. After finalizing the PPT, we had an eye-opening discussion.  The topic was on sustainability communities. We talked about the situation in Sichuan, which was devastated by the  a severe earthquake in 2008.  I mentioned about the Daping Village, which one of China’s leading environmental NGOs, Global Village Beijing, is turning into a model of sustainable rural development. It was expressed that many of the media stations were broadcasting one village and was receiving most of the donations from viewers, while other villages were in the shadows. It was fascinating to hear about the issues of inequality and unequal distribution of resources for rebuilding efforts in China. It helped created and paint a more vivid color of China’s reality and the different views youth have about it.

2.     As an Environmental Studies Major from Seattle University, I also have interest in nature and going to visit beautiful and historical places. Weiwei understood this, and he made a special effort to find a place he though I could enjoy. He took me out of the city to Beijing Botanical Garden 北京植物园.  The garden is situated in the northwestern outskirts of Beijing, between Xiangshan Park and Jade Spring Mountain. I remember one of my fondest moments was seeing all the different colorful variations of tulips. I felt like I had returned to northern Washington in Bellingham where there are tens of acres of tulip fields to observe.  We continued walking to one of the temples, where there were pine trees over 300 years old. I felt like I was walking through the old forests in the Cascade Mountains looking at Cedars and Hemlocks. This was very special as Weiwei showed one of his favorite places that I would have missed if I had come on some prearranged tour.

3.     Zhan Yufeng invited me to one of the International Youth Summit on Energy and Climate Change (IYSCCC) trainings at Tsinghua University in mid April. It was being held in the university’s first energy efficient building built in cooperation with the Italian Environmental and Natural Resource Department and the University.  The session was spoken in Mandarin. I was on the only foreigner present. The topics were around proposal writing, recruiting attendees, and locating sponsors, and event leadership. The hosts of the meeting were from Peking CDM, Tsinghua Green Association, and CYCAN. It was these connections that introduced me to Chinese youth activism that is emerging. I got a unique opportunity to speak for a moment, and share why I felt it was key to rise the next generation of youth leaders, and the important role, I believe, that Chinese youth can take. I felt fortunate to be able to engage in such defining activates.

All in all, in the 21st century with great global issues, I believe, that we cannot be a spectator but an active and engaged citizen.  I believe that relationships such as in CUYCE provide a means to experience another country in fundamentally different way, a way that sees life from a more local perspective, participate intelligently, and also feel a sense of home and shared and supported community.  CUYCE has opened this door for me. I am thankful for this and look forward the numerous opportunities ahead. I encourage others to seek similar opportunities when they travel abroad.